As much as women think they have made great gains in the world of voting and the workplace, women are still used and abused terribly under the flag of collectivism. They are expected to act in unison—as a collective group and often behave in such a fashion making them a serious barrier to logic when hard decisions have to be made. It is probably one of the hardest things to write about in regard to correcting aspects of politics and philosophy plunging our society into the current quandaries that we find ourselves in—but if proper correction of modern problems are to have any hope—this problem must be identified and dealt with so that civilization can fix them. That is why the next chapter of my Cliffhanger story The Curse of Fort Seven Mile deals exclusively with this problem. Here is the description of the chapter from the book as it appears on Amazon.com. 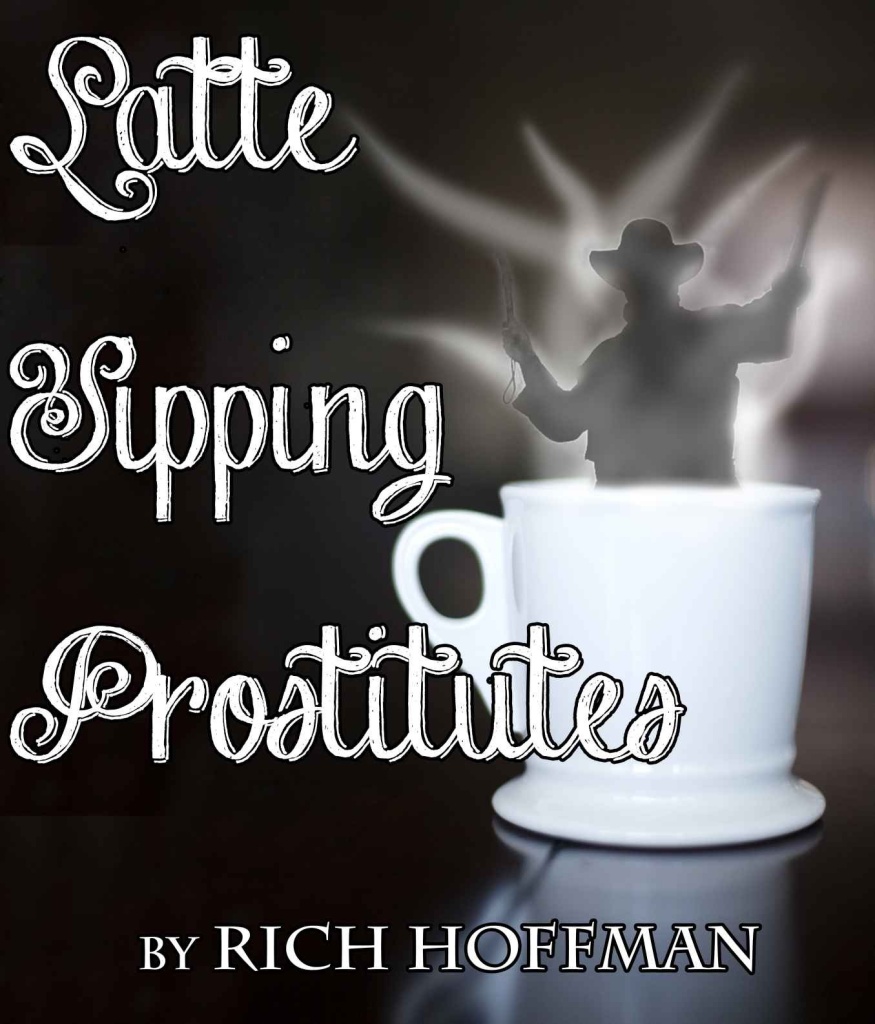 A school board president, a chamber of commerce CEO, a teacher’s union president and a wealthy socialite plan the demise of Fort Seven Mile’s new mayor after a brutal attack by Cliffhanger upon the police force. A sinister plan is hatched during their weekly latté gatherings where the four women routinely plan the manner of politics around their community along with their fantasies of sadomasochism, gossip, and social treachery.

Their grabs for power escalate as they organize a union protest at the Mayor’s home in a hope to diminish public approval of the beautiful Misty Finnegan and draw out the bandit Cliffhanger with a trap only the crafty mind of Patty Latrine could fathom. What they discover is a secret nobody could even comprehend leading to events that will change life as they know it forever.

Long time readers here will recognize the title as a joke that has evolved over several years. Specifically, I have used such a term often to describe the type of people who illogically vote for continuous tax increases not from individual thought processes, but from the pressure of their peers. Once it became obvious to me that women were being used by other women to promote obvious trends in politics that were disastrous to our society it was clear that the tendency needed to be called out so that it could be recognized and corrected. Men have been slow to join me in pointing out such a tragedy because they have been pinned into a corner with a check-mate in regards to social conduct. If they support such viewpoints as I have proposed, then they are cast about as Neanderthals and sex is cut from their lives with surgical precision.

This has always been by design, progressive groups knew that this would be the biological component to their movement and they sought to exploit it behind the flag of feminism. Like in the story described above, every community has some variation of the characters mentioned. Sometimes there are men included, but the basis of most society presently conducts their schemes against the voting population in much the way that the ladies in Latté Sipping Prostitutes do. And usually the groupings are broke down along similar political lines. The evidence can be seen at various Chamber of Commerce events and charity fund-raising efforts. Always the intentions from a distance are good—but the subtle underbelly of the strategy is often sinister—and deeply complicated. To hide that complicated web of motivations men have been urged to go along to get along and turn off their brains.  It is likely one of the biggest modern problems that is facing our culture which nobody talks about. But they should.

Even though I have written about this problem extensively and provided vast amounts of scientific data to support the conclusions and discussed it over hours of talk radio—the best format to explore the problem is within fiction. It is within the context of a story that the various psychological layers of the forces at work can be properly explored in all their connecting fashions. The primary antagonist in this particular story Latté Sipping Prostitutes is Patty Latrine—the wealthy socialite. Every community has some version of her and she is found among all the various groups herding women along like sheep toward a destiny not always to their liking.

The main protagonist in Latté Sipping Prostitutes even though she doesn’t have a line of dialogue but is only seen and talked about is the new Mayor of Fort Seven Mile, Misty Finnegan. As a woman she is truly a liberated free-thinker who is independent to such an extent that she lives beyond the control of Patty Latrine which makes the socialite feel very insecure—an emotion that she’s not used to experiencing. What has the women of her group so up in arms over the new mayor is that Misty is home schooling her children which means she doesn’t blindly support the public education system that Patty uses to advance her social strategies. To make matters worse Misty is a beautiful woman and the socialites under Patty’s leadership find the mayor to be a threat to their own power of seduction—that ability to perk out a lip or flirt with men in a way to get what they want when they want it. (Most human communication is non-verbal and women are great at it). Misty Finnegan’s presence as a powerful political figure of a truly strong and independent woman creates major problems for Patty Latrine and her minions of latte sipping despots who will do almost anything to stay in Patty’s good graces.

So what do the Patty Latrines of the world have that other women want—and why would women as a collective group even be prone to her strategies? Well, that is part of the problem and I’ve seen it firsthand—which I write about extensively in this latest Cliffhanger installment. Women like to have places to wear the jewelry and cloths they pick up here and there either from men, or from a shopping spree and people like Patty give them someplace to wear them. It’s just another form of control. If men committed sins in the past by not allowing their wives to drive a car, or getting them continuously pregnant to keep them from running off with another man, women like Patty Latrine use social status to do the same, by controlling the flow of politics at a communal level. If you don’t do and say as Patty does, an invite to her next charity dinner won’t come and nobody wants to be cast out of such events when everyone will be there!

It used to be the good ol’ boys network that was the vile centerpiece of corruption and discontent in every community, but that is no longer the case. Now it is women and they are every bit as bad as the men were. But they have the social mask of goodness to hide that evil behind built by progressive strategy over time to suppress judgment against their actions. What both groups did was wrong acting as a collective unit. Individually, if spoken to, they would say one thing, but within the peer groups of their Central Committees and social networks is a “team” approach which often requires them to act against their best judgment. That is where the trouble starts and the evil driven by a lack of personal authenticity creeps into the picture to bring with it corruption—because once a human being makes such a decision, they are willing to compromise on everything and they lose their integrity.

My work of course in The Curse of Fort Seven Mile is intended to be thought-provoking. For that reason I am particularly proud of Latté Sipping Prostitutes because it is such difficult subject matter to properly articulate. I don’t see many creative types in literature or film attempting to grapple with this problem—so it is advancing unhindered throughout our social structure without analysis, but, not in this new installment of Cliffhanger. After completing the story I knew that I had pulled together some difficult elements and readers would benefit from the result. That result might be controversial but it’s honest and leads to an exciting and unique chapter to the Cliffhanger story arc. A chapter that’s a lot of fun, but is brutally honest in a way that I’m known for; Latté Sipping Prostitutes is one of those stories that has a lot going on but is all too revealing. It might ruffle some feathers but to my intention, that is the difference between good literature and slack-jawed news articles.

The new installment can be found at: