I think the best thing that could happen is that Julie Shaffer would lose her seat to a new school board candidate in this upcoming fall 2019 election. Jim Hahn is a potential for that, he’s running and is a business guy, and if the Lakota school board could pick him up and keep Todd Parnell, and Lynda O’Conner, there would finally be a three vote conservative presence that could avert the current levy plans that are in place for attempts beginning as early as 2020. If there is another tax attempt, I will say right now that I am all on board to resume the fight against it, and I understand that others are also interested. A gentle message to Lakota and all the real estate agents that spawn off the school system, there is a storm coming, so I hope you have built a boat, because the next levy attempt will be a bloodbath. The liberal activities of Brad Lovell Kelley Casper and of course Julie Shaffer along with the very disappointing sentiments that have evolved from the new superintendent Matt Miller, they have squandered a very good opportunity, a great budget with declining enrollment that has even further inflated the payroll for teachers who clearly aren’t worth the money, and they have been caught in gross mismanagement. The two conservative school board members have shown a bit of hope in properly managing the district, but the school board itself hasn’t gone far enough—the liberal activism is still a problem in the management of the government school.

I have no love for Julie Shaffer, we have a history together. When she couldn’t defeat my arguments back in 2012 she had to turn to identity politics to separate the No Lakota Levy group I represented for their 2013 attempt which they ended up winning by a very narrow margin. But it wasn’t Lakota who did anything to turn the tide, it was Sheriff Jones who wanted to put armed cops in the schools to protect them from mass shooters, or the potential. As it turned out, just as I said it would be, the whole thing was a scam, the money from the levy wasn’t used to cover cops or even security. Lakota did do those things, but ultimately the money was only to give teachers raises for their very high wages. My argument back then was that it didn’t bother me that Lakota had several teachers with six figure salaries, but that through collective bargaining the labor union wanted everyone to have those extraordinary salaries and back then the average wage was over 70K per year. We always hear stories about how low teachers are paid, well that’s not the case at Lakota, the teachers are well paid and the union props them all up and makes it nearly impossible to fire problem employees like the recent drama witnessed by the ex-Lakota employee, the transgender activist Emily Osterling. She sued the district for her proposed termination, and she won a settlement of $175,000 which the tax payers had to cough up ultimately.

Lakota is in my back yard so I want them to do well, but only until they become a pain in the ass in asking for too much money. I am proud of Lakota as long as they aren’t asking for money and by looking at their annual budget of over $220 million per year it is clear that the school board has not managed the money correctly. Now to their defense, the collective bargaining agreements by the union make normal value stream assessments nearly impossible. It takes three solid votes to really manage a district when there are five board members. It has taken a long time to get the two good ones that we have now and a lot of pushing and shoving. I have been asked many, many times to take on the job, but for my part, I have no desire to negotiate with a labor union all the time and I think the education system should be completely dismantled and recreated with a school choice competitive option. So its not a job for me, but we do need smart people who understand value creation to do the job. In that regard, there is an option in Jim Hahn.

However, the union vote will come out for their own preservation and they will vote this November for Julie Shaffer, so it will be a tough climb for Jim Hahn. He’s going to need some help and a good turnout. The union will not want him on the school board because they are against anything that does not stop the upward mismanagement of financial resources that are set to run out by 2023. Most of that $220 million budget is all in teacher salaries and that is just ridiculous. In an age where kids are learning more from hand held devices such as smart phones and personal computers, physical teachers are going the way of the drive-in. The test results just do not show that a teacher in the classroom make or break much in a student’s life. Most of the feel good stories are propaganda by the unions which young people are prone to be sucked in to, but are shallow in credibility at best. Just take a look at the Lakota website and their reported financials. They are short on substance but are flashy with surface points and comparisons to other districts who are every bit as much of a disaster as they are—because they are all driven by unionized employees hungry for inflated wages and as little work to do as possible.

The bloodbath that I am promising will be simple value stream analysis of what Lakota really does for our community, which is very little. The high school football games are only important to the students and their families, the other 100,000 people who live in the Lakota school system could care less and people like me without kids in the school system go through our daily days not even noticing the school buildings or their occupants. Life is busy and there is a lot for people like me to do that has nothing to do with the school system, and people like me are in the majority. All it takes is to get them to show up to vote, and they can easily out vote the union radicals which is why it takes Lakota an average of three levy attempts to get a tax increase passed. And to do that they have to resort to guerrilla warfare, not the goodness of people’s hearts. I would personally rather have the bloodbath rather than harm future business growth in our region with another Lakota tax increase, and argued that way, the way all businesses are measured, the story is quite clear. Lakota is not a value to our community, but a hindrance and the product they produce is failing and will continue to fail until the unions no longer run the government schools. That is, unless a third conservative is elected to the school board, and the budget crises that is coming can be averted. The value of the district won’t change but the bad reputation that will put Lakota through a lot of pain could be averted. And I would think that to be a good thing. 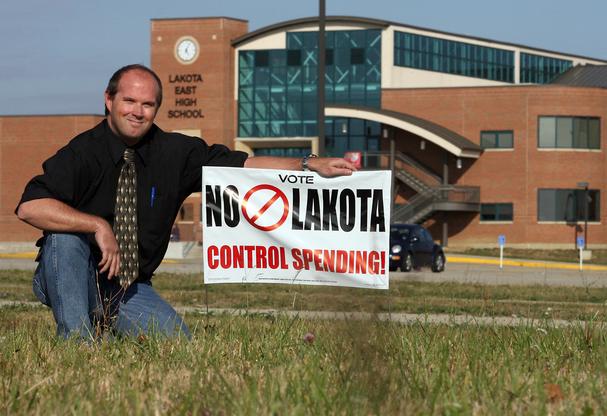